Many of us who enjoy baking bread have been convinced that the only way for us to achieve that perfect crispy crust is through the use of a Dutch oven. Here are some simple yet effective ways of baking sourdough bread without a Dutch oven.

Why Do We Use a Dutch Oven for Baking Sourdough Bread?

There are a variety of reasons when it comes to most bakers baking their sourdough loaves in a Dutch oven.

For one, a hot Dutch oven happens to produces great and consistent results. With a heavy cast iron pot and a lid that retains steam beautifully so that your bread can emerge moist with a thin and crispy crust. Dutch ovens are also oven safe, and deep enough to accommodate the expansion of the sourdough baking process during oven spring.

Additionally, the process takes less time as opposed to using other methods. Since the temperature is regulated by the heat source below or above the Dutch oven, there are fewer variables to control when it comes to cooking times. You can even bake multiple loaves at a time, and have them emerge with the same crunchy results.

While Dutch ovens are certainly fantastic, they aren’t the sole magical element that produces good oven spring. In fact, as long as you’re retaining enough steam, with the perfect oven temperature you can most certainly create the ideal baking environment for your sourdough bread, to emerge with a wonderful crunchy crust.

The Easiest Way to Bake Sourdough bread Without a Dutch Oven

One of the easiest ways to bake sourdough bread involves the use of two identical bread pans.

Load the sourdough into one bread pan, and use the second bread pan as a lid to entrap all the steam. Seal the two bread pans together using metal clips.

If you don’t have baking pans in your kitchen, then use a roasting pan instead, remembering to line it with a baking sheet.

Halfway through the bake, remove the top bread pan so that the sourdough bread baking can achieve completion without the lid, granting the slow release of steam, ensuring that your bread emerges with a thin and crispy crust.

This method is brilliant, since most of the materials required are commonly found in the kitchen. The bread pans are also very light in weight, making it easy to remove from the hot oven. This method also provides great oven spring, but it’s only downside being that the loaf will be covered for the first half of the bake, and during this baking time you won’t be able to monitor the expansion and browning of the bread.

A common alternative to baking sourdough without a Dutch oven is to bake uncovered. Meaning that your loaf will spend most of its time in the oven, beside a pot of boiling water and atop a baking stone, with the oven door ajar.

This method allows you to take entire control over the steam as you can keep adding more hot water, and take control of the baking temperature. Since the bread is left uncovered throughout this process, you can see watch as the dough heats, and expands, as well as monitor the browning of your bread dough at a closer proximity.

The only downside of this alternative is that the removal of the pots of boiling water can be quite precarious, as you can potentially burn yourself, which is why you should always wear oven mitts or oven gloves before sticking your hands into the hot oven!

Why Steam Matters for Crusty Bread?

When planning to bake bread, you should know that steam plays an important role in this process. Steam is vital during baking, because it prevents your loaf from setting before the bread rises, or drying out and baking too quickly.

Slowing down crust formation, allows the bread to rise rapidly (with the help of more steam) keeping the outer crust thin and crispy instead of tough and chewy, ensuring your bread develops a pleasant brown color without searing.

Tips for Safely Creating Steam in Your Oven

There are many methods in creating a baking environment, comparable to that of a professional baker’s oven. You just have to make sure that you’re creating more steam in your oven, which will give the best oven spring for your bread, whether you plan to bake baguettes, or sourdough bread, your loaf will emerge deliciously crisp, just how you like it!

Here are some effective safety tips for you to follow, before proceeding to create steam in your oven for sourdough

To achieve a crispier crust, you can use one of the following methods:

Using two skillets – preferably one being smaller than the other – place the smaller skillet on a separate oven rack below the larger skillet (this is for the dough). Preheat the oven then place your cast iron skillet inside. Once it’s time to bake grab 10 ice cubes from the freezer, ready to pop into your smaller skillet. Essentially we’re planning to use the ice cubes to create steam, but first you’re going to place your dough into your pre heated cast iron skillet.

Don’t forget to wear oven gloves! Gingerly, place the hot skillet back into the oven, once that’s done, pour your ice cubes into the second smaller hot skillet and close the oven door.

Once the ice hits the hot pan it will create steam, ensuring your loaf emerges with a perfect crisp crust. The liquid from the cubes of ice will dissipate entirely after 20 minutes, allowing your bread to finish baking at an even baking temperature.

The next method is to bake crusty bread using an oven safe pot, along with an oven-safe lid. You should opt for a stockpot instead of a regular baking dish that you would normally use to bake a casserole, as these dishes are not big enough to accommodate the oven rise for your sourdough bread.

For best results use a pot that’s at least 4 inches deep, and safe enough to remain in tact whilst sitting on your oven rack. If you’re using a stainless steel pot, then you won’t have to preheat your pan, as it will heat up more quickly compared to a cast iron skillet or Dutch oven. If you preheat it, you could risk burning the bottom of your bread!

When you’re ready to bake, place your rounded dough on a parchment paper then lower it into the cold pot, and place it into your home oven, then cover it with an oven safe lid. Bake according to your sourdough recipe, then remove the lid, during the last 10 minutes of baking, just like you would when baking with a Dutch oven.

Use a Pizza Stone or Baking Steel

Finally, try baking your bread on a pizza stone or baking steel, using an oven safe dish of water to create steam.

Similar to a Dutch oven, baking steel effectively conducts heat, distributing it evenly, and ensuring a good bake. To achieve better results, try preheating your baking steel for 45 minutes to an hour before baking.

For this steam method, you’re going to fill a small baking dish with water, and place it on the oven floor, directly beneath your baking steel. Once the oven is ready to bake your bread, use a piece of parchment paper to transfer your dough to the oven and start baking!

With 10 to 20 minutes remaining, remove the dish of water from the oven, allowing your bread to continue baking. 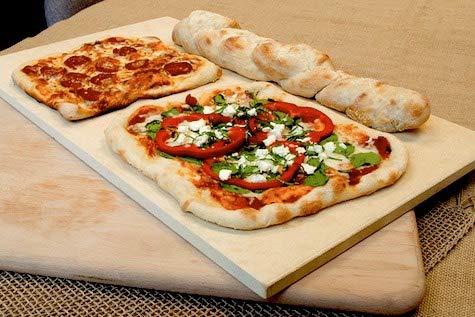 Can You Bake Sourdough Bread in a Slow Cooker?

Though baking sourdough bread in a slow cooker isn’t completely absurd, you’ll notice that your bread will not achieve a crunchy crust like it would have if it had been baked in the oven.

Alternatively, you can slide a dish towel beneath the lid for the second hour of baking, to ensure the crust isn’t too soft at the end.

Leaving the bread inside the slow cooker for a little longer than advised may help the crust emerge with a decent crunch, though it won’t taste nearly as incredible as traditional sourdough bread.

So Sourdough Bread Minus the Dutch Oven?

Now that you’re aware of the different (but safe) methods of baking sourdough bread without a Dutch oven, perhaps you’ll spend most of your days baking, and experimenting with different varieties of bread flour.

Create incredibly tasting sourdough bread that you and your family will simply adore!

Can I bake sourdough without a Dutch oven?

If you don’t have a Dutch oven available, then another way to bake sourdough bread is to bake it in a loaf pan. The trick here is to use more than one loaf pan, so that you can flip the second pan over the top of the first pan, as an effective steam trapping method.

What can I use instead of a Dutch oven for sourdough bread?

You can try to use an enamel Turkey roaster as an alternative to using a Dutch oven for baking sourdough bread. Preheating can achieve better oven spring.

Best Dutch Oven for Sourdough Bread: The Right One for You (Reviews 2022)