Scoring sourdough bread might be one of the toughest challenges new bakers may have to face. There’s no right or wrong way to go about it. In fact many have developed their own scoring techniques to make it unique and easier for themselves. The important thing is that your sourdough isn’t affected by the scoring once it’s baking in the oven. Let’s take a look at some of the best tips for scoring your sourdough bread.

Why Should You Score Sourdough Bread?

Slashing the surface of the dough with a knife is what we call scoring bread. It’s important to score bread before baking so that the gases can escape during the baking process.

If you fail to score your bread it can burst open at the weakest point.

Failing to score your sourdough bread can affect the oven spring and crumb of your loaves.

How to Score Sourdough Bread?

There are many ways to score your sourdough bread.

You can opt for an effortless scoring method with a quick straight line or a cross. Some popular bread scoring techniques include a simple cross, wheat stalks, leaves and vines.

The key thing however, is that apart from the type of score you plan to do, you will need a primary score. This is one score that is much deeper than the other scores so that your dough breaks open from that point, allowing your more intricate patterned scores to bloom.

If you’re far from a professional baker and aren’t very confident in attempting intricate scoring patterns just yet, then you may choose to stick to a single swift slash as your preferred method of scoring. This is both simple and guarantees a beautiful loaf.

When performing a primary slash you want to go in with a single swift motion, poising the blade or bread lame at a 90 degree angle, then your sharp blade should slice through your dough easily in a single and quick movement. You should aim for one deep slash with more shallow cuts for a decorative touch.

There are a variety of tools that bakers use to score bread, with some being more effective than others.

Here’s some tools for home bakers to choose from:

The most popular tool for scoring sourdough bread is a lame. Essentially it is a razor blade that can be straight or curves, and is attached to a handle. 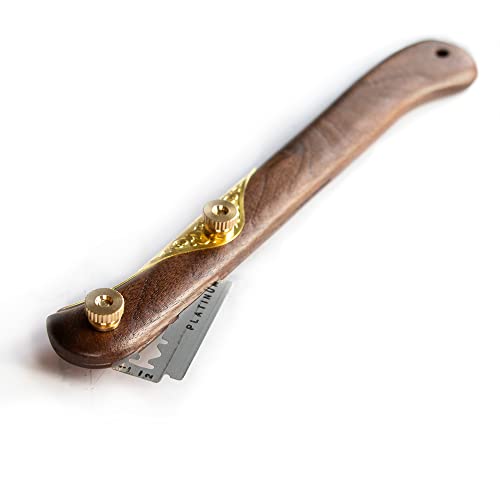 If you don’t have a lame, you can opt for a sharp knife or even some kitchen scissors to score your bread. A lame or sharp razor blade provides the most precision, but a knife or scissors do the job just as well.

In some scoring techniques, scissors are used with a lame to create some intricate patterns on the dough. You shouldn’t use a serrated knife for scoring sourdough bread.

A cake turntable is a good tool for scoring dough because it allows you to move the dough while scoring instead of moving around the dough. 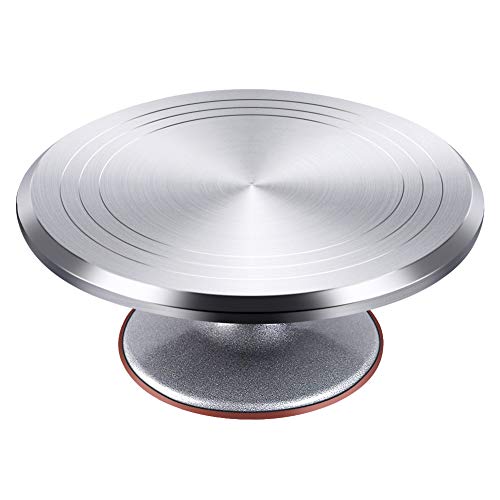 Scoring your bread is essentially the last step in sourdough baking. And as you continue on your sourdough journey you’ll stumble upon many techniques that you may wish to try.

Let’s take a look at some of the tools we can use to achieve some intricate sourdough bread scoring patterns.

Using a Knife to Score Bread

If you’re scoring bread dough with a kitchen knife here are some tips to ensure you achieve the best results: 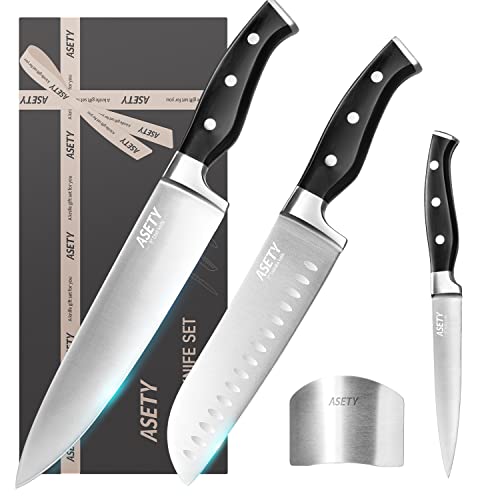 Kitchen scissors are a great tool for scoring bread, especially when your loaf is encrusted with nuts, grains or seeds. Straight or curved blades aren’t the best tool in this instance because it can cause jagged scoring.

Here’s how to get better results when using scissors: 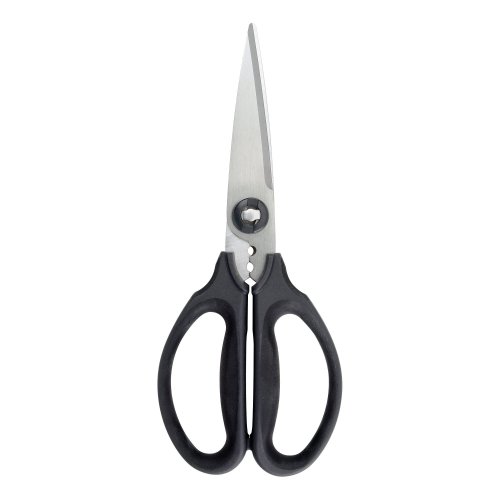 A razor blade or lame, is one of the popular tools used to score sourdough bread. Mainly because the hand is poised so close to the dough and the cuts that are made are more clean and smooth. Many bakers find that it is much safer to use these sharp blades as opposed to longer blades like knives. 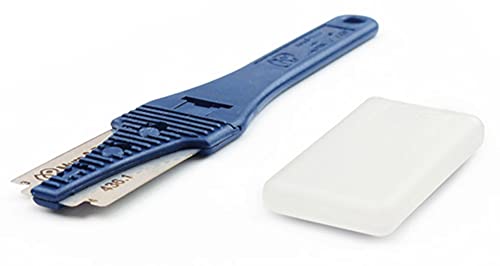 You can use a curved razor blade to score dough when you want your loaf to have a more prominent crust area.

The curved blade is normally reserved for professional bakers, as its pretty complicated to use compared to a straight blade. Here are some tips for those who like a challenge: 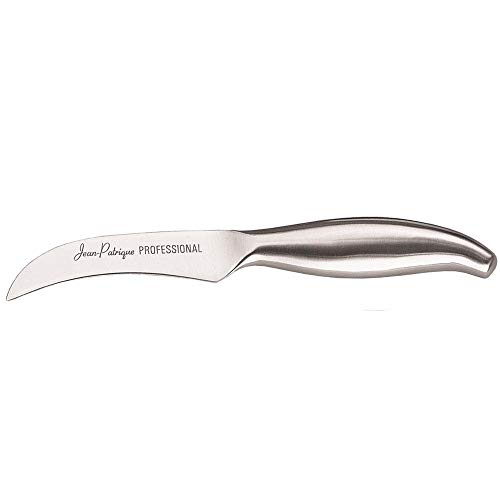 How Deep Should You Score Sourdough Bread?

Generally, you should aim to score your dough around ¼ to ½ inch deep. The trick here is to make sure that you have a single slash at ¼ to ½ inch deep, whether it travels along one side, or as a small cross on top of the dough.

Next if you’re intending to score a more intricate pattern then it needs to be implemented into the dough with more shallow cuts. Essentially your primary score needs to be fairly swift and deep, and then your artistic scoring can be your secondary score.

Try not to score too deep into the sough, because this can affect the gluten and shaping on the dough, and will not produce a great oven spring. It may also cause a huge overlapping eat of dough which can be hard to cut into once baked. 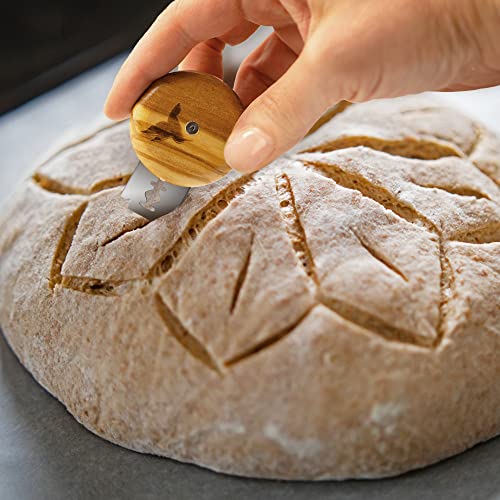 The scoring technique you choose may not be unique, but it’ll be something you’re comfortable with. If you aren’t bothered about beautifying your loaf, then a simple cross or straight slash with a super sharp knife will suffice.

On the other hand if you want to appreciate a beautifully patterned loaf of sourdough bread with some more intricate and artistic scores, then this may take some time to become accustomed to before you achieve the desired result.

Here are some techniques of sourdough scoring for you to try:

A long smooth deep slash from one end of the loaf to the other. This cut is what creates the ear of the dough, which is a raised crust that is super crunchy once it’s finished baking.

With this sourdough bread scoring technique you’re more likely to achieve an ear and your loaf will expand beautifully.

The X score is a basic, straightforward design that’s quite popular amongst professional bakers to use on loaves.

You’ll find your loaf opening up like a blossoming flower with this design in your oven.

The square score helps provide your loaf with some height.

These four deep scores will allow the steam to escape while the loaf bakes complete with a hat on top of your finished loaf.

Advanced scoring techniques call for some artistic designs to score dough with a unique scoring pattern. This design appears both delicate and complicated, but its pretty straightforward and easy once you get the hang of it.

Your wheat stalk can be straight or curved depending on the shape of the dough.

Scoring sourdough bread can be a simple or complicated task depending on the design you’ve chosen for your bread dough. You can work with quick parallel slashes and pop the dough straight into the oven, or take your sweet time, using your blade to create pretty designs that’ll shape your loaf into something beautiful.

Here are some things to remember when scoring bread dough:

Should I Add Flour Before Scoring?

You can choose to flour or not but this decision may rely on a few factors.

For instance a light sprinkling of flour over your bread dough before scoring will create a wonderful powdery contrast when your dough splits in the oven. This is especially great for intricate patterns, as the white cast from the flour will highlight the artistic designs in the loaf.

Why is it So Hard to Score My Sourdough?

Many home bakers claim that they find it hard to score their sourdough bread. Often the blade is the culprit as it catches or snags on their dough, making it difficult for them to score in a single slash.

However, scoring your loaf can be difficult if you have:

Gluten development is essential for successful scoring because it ensures that the dough can withstand being cut and slashed without collapsing.

If your gluten development isn’t 100% sufficient, then you’ll find scoring difficult. You need to ensure that your dough is stretchy enough and elasticated before allowing it to complete bulk fermentation.

Your shaping technique is also essential in the succession of scoring sourdough bread. If the dough is slack without any surface tension your blade will catch on the dough, making it difficult when scoring bread.

You need to ensure that the shape of your dough is tight enough to create the appropriate surface tension required for scoring.

Over or Under Fermentation

Both over and under fermentation can cause your dough to collapse and expand when scoring.

The best thing to do here is to allow your dough to ferment and proof before you place it into the oven.

So How to Score Sourdough Loaves?

Choose the tool that you’re comfortable with, based on your experience with scoring. It’s probably best to opt for a lame or razor blade if it’s your first time scoring. Always aim to score in a swift single motion, as failure to do this can affect your loaf in the end.

How do You Score Sourdough Bread?

Poke four small holes at the top left, top right, bottom left and bottom right on the surface of the dough. These four indentations should connect to form a square, then hold your blade and swiftly score four straight lines to connect the dots slicing at least ½ inch deep.

How Deep do You Score Sourdough Bread?

There’s no need to press down hard with your blade in an attempt to achieve deep scores. But the cut should be deep enough so that the surface of the dough doesn’t close up again during baking. You should aim to score ¼ to ½ inch deep.

Do You Need to Score Sourdough Bread?

Why is it Hard to Score my Sourdough Bread?

When scoring your sourdough and the blade is pulling or catching on the dough, this is normally an issue with tension or fermentation. Normally the blade should easily glide through your dough, leaving a nice smooth cut.

Can You Bake Sourdough Pan Bread? (Yes! Here’s How)